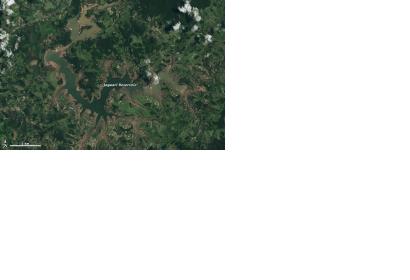 For three years south eastern and eastern Brazil has been experiencing one of its worst droughts in a century and satellite images captured by Landsat-8 in the first months of 2015 do not bring any hope.

The recent rainy season, from November to March, has not brought any drought relief and the region is already 100 to 200 millimeters (4 to 8 inches) below normal rainfall. One of the biggest reservoir systems, supplying water to half of the people in São Paulo, is only at about 10 percent of its capacity.

News and advocacy sources have attributed the depleted drinking water supply to a combination of unusual weather conditions and uneven resource management. According to some scientists, deforestation has also played a big role in changing weather patterns and water storage.

Michael Coe, a scientist from the Woods Hole Research Center who studies land and water issues in the Amazon, stated: “The fact that the reservoir is lower in February 2015—the height of the wet season—than in October 2014—the end of the dry season—tells us that there clearly is no recharge occurring. In other words, whatever rain has occurred during the wet season hasn’t been enough to produce significant runoff and fill the reservoirs.”