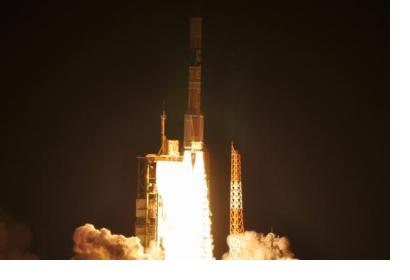 The Japan Aerospace Exploration Agency (JAXA) and Mitsubishi Heavy Industries have launched the Michibiki-4 communications satellite. The new satellite is part of a terrestrial positioning network system that will allow better communication in case traditional communication networks are unavailable due to a natural disaster.

The satellite complements the Global Positioning System (GPS) and will help reduce its error range from 10 metres to between 1 metre and circa 6 centimetres. It is part of the Quasi-Zenith Satellite System (QZSS). The QZSS will be compatible with GPS satellites and can be used with them in an integrated fashion. The QZSS satellites operate in orbits designed to keep them as close as possible to being directly overhead – near to the zenith point of an observer's frame of reference – of users in Japan for as long as possible. To do so, they use highly-inclined geosynchronous orbits. Nevertheless, QZSS can also be used in the Asia-Oceania regions with longitudes close to Japan.

QZSS is expected to be useful in many ways, for instance for the provision of seamless positioning, navigation and timing services. Moreover, the Japanese government intends to use it to set up communication channels during a failure of traditional communication networks in a natural catastrophe. To achieve this, the QZSS sends evacuation information and enables the communication of information on evacuees through the satellites. Furthermore, people may immediately receive information about natural catastrophes such as earthquakes or tsunamis via the QZSS. This will expand the access to crucial information during disasters and help maintain the safety and security of the people involved.

The first QZSS satellite was launched in September 2010, making it possible to users to receive more accurate information about their own positions and other locations on the map. Michibiki-4 is the third QZSS satellite launched this year. The four-satellite-constellation will become fully operational in 2018, with at least three of the satellites being fully visible in the Asia-Oceania region at any time. It is expected that eight satellites will be visible at any time in the region by combining the QZSS satellites with their GPS counterparts.