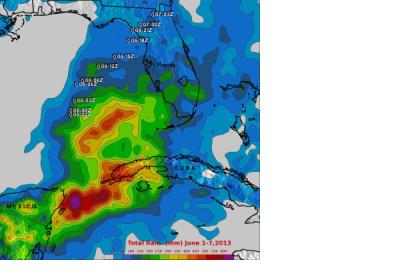 The first storm of the Atlantic hurricane season, Tropical Storm Andrea started on the late afternoon of June 5th, 2013 with a low pressure and continued throughout the whole week over the southeast of Gulf of Mexico. The storm had weakened considerably but it is still packed enough to effect Florida's Gulf coast and still carries very heavy rains causing flooding.

The Tropical Rainfall Measuring Mission (TRMM) satellite calculated the TMPA (near-real time Multi-Satellite Precipitation Analysis) rainfalls for the eastern Gulf and the surrounding region for the period 1-7 June 2013. The calculations were mapped on an image and animated at NASA Goddard.