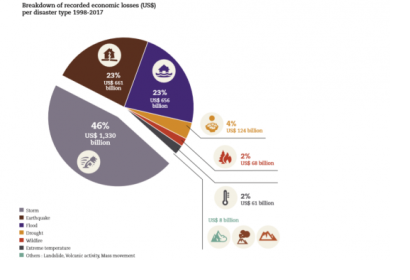 The United Nations Office for Disaster Risk Reduction (UNISDR) and the Centre for Research on the Epidemiology of Disasters (CRED) have released a new report that highlights the global trends in disaster losses in the period between 1998 and 2017.

“Economic Losses, Poverty & Disasters1998-2017” shows the significant increase of economic losses caused by climate-related disasters since 1970. Between 1978 and 1997, the percentage of economic climate-related damage was 68 per cent in relation to the total losses caused by disasters. By the period between 1998 and 2017, the percentage went up to 77 per cent - an increase of 151 per cent between the two periods.

From 1998 to 2017, 4.4 billion people were injured, became homeless, were displaced or in need of emergency assistance, while1.3 million people were killed by natural hazards. Climate-related disasters constitute 91 per cent of all 7,255 recorded events in the period under investigation.

According to the report, disasters are a major contributor to poverty in low- and middle-income countries attempting to recover from extreme weather events amplified by the effects of climate change. Accurate reporting of the extent and type of disaster is therefore of primary importance in order to establish the size and location of vulnerable populations.

At the same time that early warning systems and timely evacuations are reducing the loss of life, economic losses are growing. These losses are suffered mostly by people in the poorest countries. On average people from developing countries are six times more likely than people in rich nations to be injured, lose their home, be displaced, evacuated, or require immediate medical assistance, food or shelter, and suffer the consequences of damage to critical infrastructure.

The Sendai Framework for Disaster Risk Reduction 2015-2030, the first major agreement of the post-2015 development agenda, is aiming to strengthen reporting about disasters and represents a global plan to reduce disaster losses.

It sets out four specific priorities for action:

The United Nations Platform for Space-based Information for Disaster Management and Emergency Response (UN-SPIDER) works with stakeholders around the world to facilitate the use of space technologies in their efforts to manage disasters and reduce the economic impact of natural hazards.