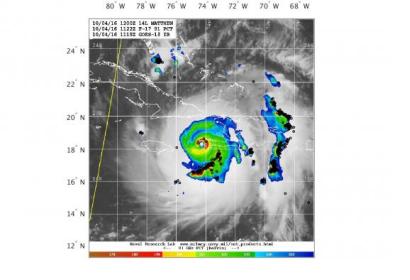 A group coordinated by the University of Washington in Seattle has developed a tool to facilitate continuous monitoring of tropical cyclones through the combination of lightning and microwave satellite data. The World Wide Lightning Location Network's (WWLLN) tropical cyclone (WWLLN-TC) platform is publicly accessible and visualizations of the global data are updated every three hours.

Lightning is a rich source of information

2017 marked one of the worst tropical storm seasons on record, leading to large disasters in affected regions. Forecasts of changes inside cyclones are crucial to prevent people from being affected and to strengthen preparedness for effective disaster management and response.

Past research has revealed that intensity changes are closely connected to the density of lightning strokes surrounding the storm centre. Hurricane Matthew, which caused widespread damage in October 2016 for example, weakened and came to its final stage just after an obvious peak in stroke rates was detected by the WWLLN.

The foundation of these measurements is a combination of microwave radiometric data by the Naval Research Laboratory (NRL) and stationary lightning data, which is detected by measuring electromagnetic pulses from more than 70 WWLLN receiver stations worldwide and combined with measurements by Earth Networks. The microwave images are gathered by different satellites such as NASA's Tropical Rainfall Measuring Mission (TRMM) and Global Precipitation Measurement (GPM), as well as the National Oceanic and Atmospheric Administration's (NOAA) Defense Meteorological Satellite Program (DMSP). The combination helps to fill gaps in between satellite cycles and increase the spatial and temporal resolution of the data.

The data is then published on the WWLLN-TC website. It provides four categories of images and histograms that help to both follow the course of the cyclone and keep track of its activities, in terms of the location and intensity of lightning strikes as well as its current pressure condition and wind speed. Information for more than 700 tropical cyclones that have occurred since November 2009 can be accessed on the website.