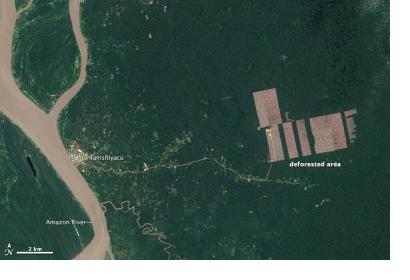 Peru hosts about 75 percent of the western Amazon jungle. Deforestation is therefore a critical topic for the country. Now, a major milestone in conserving and managing the western Amazon has been reached by mapping more than 95 percent of Peruvian forests using archived satellite imagery. The Peruvian Ministry of Environment, MINAM, has publicly released its first estimates of deforestation from 2000 to 2011.

The high resolution map (30m) was created using Landsat 5 and 7 images to generate a continuous map, with minimal clouds and shadows and shows rates of deforestation for the periods 2000-2005, 2005-2009, 2009-2010, and 2010-2011. The map shows that although deforestation rates are dropping, there is still an annual loss of 0.16 percent of the original forest cover of the Peruvian Amazon.