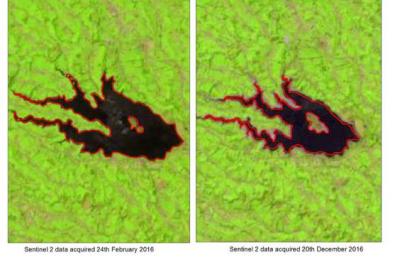 The problem of drought has been worsening in Kenya since last year and it has been declared a national disaster by the Kenyan president on 10 February 2017. The country has felt the effects of drought in many ways, ranging from crop failure, wildlife and herdsmen conflicts, people in need of food to water rationing. Given these conditions, Nairobi county has implemented a water rationing programme in January 2017, as the city’s main source of water, Ndakaini dam, has reduced significantly.

The Regional Centre for Mapping of resources for Development (RCMRD) has assessed the impact of the drought to Ndakaini dam using space technology. They took Sentinel 2 satellite data and analyzed two sets of images from February 2016 and December 2016 to see how the water in the dam has shrunk in the last year. The images show reduction in the surface area of approximately 93ha, which is nearly 35%. These findings are quite alarming, because if the drought continues, the Nairobi county risks a water crisis that might trigger other problems such as an outbreak of water borne diseases.