Satellite-based system to monitor droughts/dzuds handed over to Mongolia 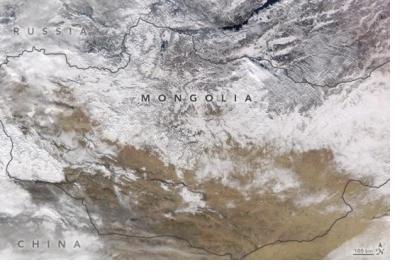 A drought/dzud monitoring system known as “DroughtWatch-Mongolia” has been officially handed over to Mongolia on 17 September by the United Nations Economic and Social Commission for Asia and the Pacific (UNESCAP) and the Institute of Remote Sensing and Digital Earth (RADI) of the Chinese Academy of Sciences.

DroughtWatch-Mongolia is a system based on satellite data which aims to provide real-time drought monitoring for disaster prevention and mitigation departments in Mongolia.

Following a request by Mongolia to UNESCAP to pilot its Regional Drought Mechanism, a project entitled, “Strengthening Mongolia's capacity to monitor and warn drought/dzud” was initiated in 2013.

As the BBC explains, “…dzud [is] an unseen and brutal natural disaster unique to Mongolia where a summer drought combines with a harsh winter and vast numbers of livestock die from either starvation or cold.” The 2010 dzud killed more than 7.5 million animals, over 17 per cent of the country’s total livestock.

The project in Mongolia involved cooperation between UNESCAP, Mongolia’s National Remote Sensing Centre (NRSC) within the Information and Research Institute of Meteorology, Hydrology and Environment (IRIMHE) along with the technical support of RADI; and further support from three service nodes of the mechanism in China, India and Thailand.

As result, the DroughtWatch system, which utilizes satellite data, was installed and operationalized in the country with drought indicators tailored to Mongolia’s unique climate and landscape. Thus, Mongolia’s capacity to monitor and predict droughts and its unique natural disaster, dzud, has been enhanced.

As explained by a UNESCAP official, “Signs of drought can be observed from space long before they are visible to the human eye. Advances in space technology allow us to monitor the condition of crops, or the availability of water, from satellite images, and sharing this information through regional cooperation will save lives and protect livelihoods.”

In 2013, UNESCAP launched the Regional Cooperative Mechanism for Drought Monitoring and Early- Warning (the Regional Drought Mechanism) – a platform providing timely and free satellite-based data; products; and training to regional drought-prone countries – to enhance the capacity of governments in terms of agricultural monitoring and early-warning. When combined with information collected on the ground, the data leads to more effective detection of potential drought conditions.

The Regional Drought Mechanism is a flagship programme of UNESCAP’s Regional Space Applications Programme for Sustainable Development (RESAP), which promotes the application of space technology and Geographic Information Systems (GIS) for supporting disaster risk reduction and inclusive and sustainable development. For example, in times of disaster and emergency, and to avoid the loss of life and minimize economic losses, UNESCAP responds promptly to requests for support by disaster-affected Member States. Satellite-derived products and services include scenes of near real-time and archived satellite imagery as well as damage maps, provided by RESAP members and UNESCAP’s strategic partner, UNITAR/UNOSAT.

One-third of Mongolia's population depends entirely on pastoral farming and the loss of pasture caused by dzuds leads to widespread starvation amongst livestock, devastating the herds and livelihoods of nomadic herders.

As highlighted by the United Nations Development Programme (UNDP), Mongolia is one of the countries which is most vulnerable to global warming. “In the last 70 years, its temperatures have climbed three times faster than the world’s average, rising more than 2 degrees centigrade and surpassing the global threshold.” In 2017, Mongolia saw its hottest summer in 50 years, with two thirds of the country stricken by drought, while desertification has already turned a quarter of its land to desert, according to official data.

Over the last 50 years, the Asia Pacific region has suffered nearly $1.3 trillion in economic losses to disasters. Losses in the region could exceed $160 billion annually by 2030.

This article was contributed by Jack Kavanagh, UN Online Volunteer mobilized through  www.onlinevolunteering.org .