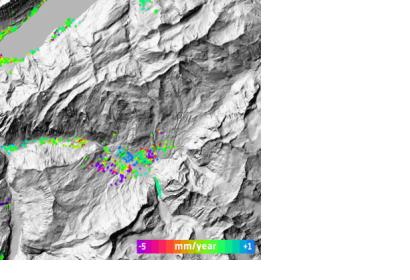 Archived radar data from the Envisat mission are playing an important role in mapping landslides in Switzerland. The mission’s vast archives continue to prove useful for mapping ground deformation. Landslides are a natural hazard of special relevance in Alpine regions. Earth-observing satellites – specifically those equipped with radars – can help scientists to map and monitor ground movement. From their orbits some 800 km above the ground, satellite radars can detect these ground deformations down to within centimeters. When two or more radar images of the same area are combined, positional changes are revealed. This technique, called Differential Interferometric Synthetic Aperture Radar – or DInSAR – has become a useful tool for detecting ground deformation. The Swiss corporation Gamma Remote Sensing began using DInSAR on Swiss landslides with data from ESA’s ERS missions in 2000. Following Envisat’s launch in 2002, they continued to detect and monitor alpine land displacement for the next decade. Using the radar data, Gamma Remote Sensing provides deformation maps that are used by Swiss cantons to generate regional hazard maps. This process is overseen by the Swiss Federal Office for the Environment, which is responsible for minimising natural hazards, protecting the environment and reducing risks to human health.From 2014, data from the Sentinel-1 mission will be used to build upon the existing archive and provide monitoring.