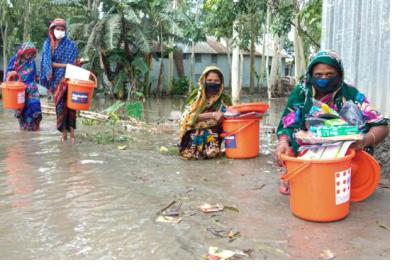 In the latest example of anticipatory humanitarian action, the United Nations released $5.2 million from the Central Emergency Response Fund (CERF) to help communities in Bangladesh prepare themselves ahead of major monsoon floods. The allocation of funds to agencies in the country to prepare to deliver support was triggered by a forecast from the Global Flood Awareness System (GloFAS), which predicted areas having a greater than 50 per cent chance of experiencing a severe flood between 14 and 16 July. Following a second forecast by the Government’s Flood Forecasting & Warning Centre (FFWC) on 11 July, aid workers began distributing the aid. The swift assistance provided in Bangladesh comes as United Nations Under-Secretary-General for Humanitarian Affairs and Emergency Relief Coordinator Mark Lowcock [has agreed](https://www.unocha.org/story/un-humanitarian-chief-release-140m-cerf-funds-anticipatory-action-projects) to allocate up to $140 million from the UN’s Central Emergency Response Fund (CERF) to support a series of anticipatory-action interventions, leveraging developments in data and predictive analytics. Anticipatory humanitarian action is based on evidence and recognition that interventions undertaken before the full impact of a disaster can help save lives, mitigate suffering and lower the cost of responding to the humanitarian consequences. With forecasting and communication of early warnings improving over the years, work on financing solutions to translate early warning into anticipatory action has also advanced. A number of entities have launched anticipatory action frameworks in the recent past. For example, the World Food Programme (WFP) launched the [Food Security Climate Resilience Facility (FoodSECuRE)](https://documents.wfp.org/stellent/groups/public/documents/communications/wfp279583.pdf) in 2015 to, among others, uses seasonal climate forecasts to trigger action for community resilience-building and for preparedness to reduce the impact of climate disasters before they occur. The International Federation of Red Cross and Red Crescent Societies (IFRC) [runs](https://www.forecast-based-financing.org/wp-content/uploads/2019/03/DRK_Broschuere_2019_new_era.pdf) a Forecast-based Financing (FbF) programme to enable access to humanitarian funding for early action based on in-depth forecast information and risk analysis. A key element of FbF is that the allocation of financial resources is agreed in advance, together with the specific forecast threshold that triggers the release of those resources for the implementation of early actions. Space-based and in situ information play a critical role in establishing forecasts and informing risk analysis. In the case of GloFAS, an operational system of the European Commission Copernicus Emergency Management Service to monitor and forecast riverine floods across the world, satellite data and in situ data serve as input for meteorological forecasts, which in turn feed into hydrological models. ![The GloFAS system: Input data and parameters (yellow), modelling chain (blue) and dissemination interface (grey). Image: European Commission Joint Research Center.](/sites/default/files/glofas_system_v1.png) The GloFAS system: Input data and parameters (yellow), modelling chain (blue) and dissemination interface (grey). Image: European Commission Joint Research Center. The GloFAS system is composed of two complementary systems, which can be accessed freely through the [GloFAS map viewer](https://www.globalfloods.eu/glofas-forecasting/): - GloFAS 30-day, a daily hydrological forecast which provides a quick overview of upcoming flood events for the next 30 days - GloFAS Seasonal, a monthly hydrological forecast which provides river flow outlooks highlighting unusually high or low river flow up to 16 weeks ahead In the case of an [activation of the FbF for dzud (extreme winter)](/news-and-events/news/remote-sensing-data-used-dzud-early-action-mongolia) in Mongolia earlier this year, the Mongolian National Agency for Meteorology and Environmental Monitoring (NAMEM) made use of MODIS satellite data, among other resources, to develop a extreme winter (dzud) risk map. The map showed that over 50 per cent of the country were at risk of a severe winter. Following the analysis, the International Federation of the Red Cross and Red Crescent Societies (IFRC) released funds to limit the impact on vulnerable herders.
UN helps monsoon-affected river communities in Bangladesh before peak flooding
Tue, 07/21/2020 - 14:55
Mongolia
Bangladesh
Ethiopia
Somalia
Drought
Flood