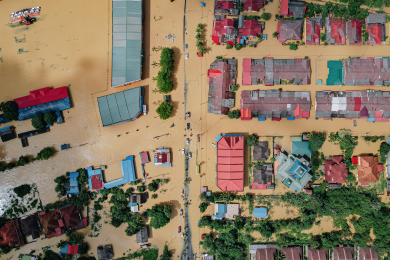 According to the latest report of the climate assessment issued by the Intergovernmental Panel on Climate Change (IPCC), human-induced climate change is creating serious and widespread disturbance in nature, impacting the lives of billions of people worldwide.

Satellite observations are a critical contribution to the study, as are various long-term databases on critical components of the climate, dubbed Essential Climate Variables, developed European research teams as part of ESA's Climate Change Initiative.

The research indicates that climate change is here to stay and that some of its consequences are already inescapable. It also urges for aggressive, expedited action to adapt to climate change while also rapidly reducing greenhouse gas emissions.

The report, released on 28 February, is the second volume of the UN Intergovernmental Panel on Climate Change's current climate assessment. The first volume, published in August, analyzed the climate's physical status, while the third, due for April, will examine humanity's options for combating climate change, including strategies to reduce greenhouse gas emissions.

The paper estimates that between 3.3 and 3.6 billion people live in locations classified as "particularly susceptible to climate change." However, these consequences are unequally distributed, and those most vulnerable are frequently blocked off from resources that may assist them in adapting or mitigating risk.

The research examines how catastrophic storms, droughts, floods, heatwaves, and wildfires are affecting food production, interfering with fisheries and aquaculture, and wreaking havoc on cities, infrastructure, and human health.

Satellite measurements from the ESA's Climate Change Initiative have played a critical role in the evidence-based evaluation of climate change impacts on land, freshwater, ocean, coastal, mountain, and polar systems.

The report advocates for swift action to adapt to climate change while also implementing quick, profound reductions in greenhouse gas emissions. While Earth observation has measured several elements of climate change, its role is evolving to assist national entities and stakeholders in building resilience and working toward their net zero pledges.

Climate-Space, ESA's proposed new climate program, which is subject to approval at the ESA Ministerial Conference in November 2022, aims to play a significant role by harnessing Earth observation and transforming it into actionable information for stakeholders and national entities in order to help them meet their Paris Agreement commitments.