Satellites show effects of long-term drought on the Congo rainforest 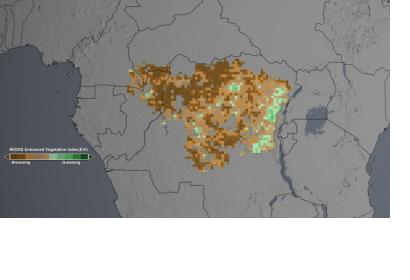 A new analysis of data derived from various satellite sensors shows that Congo's rainforest, the second-largest tropical rainforest in the world, has suffered from long-term drought over the past ten years. The study included data from the Moderate Resolution Imaging Spectroradiometer (MODIS) instrument on NASA's Terra satellite, the NASA/JAXA Tropical Rainfall Measuring Mission, NASA's Quick Scatterometer (QuikScat), and NASA's Gravity Recovery and Climate Experiment, a joint mission with the German Aerospace Center. It revealed a large-scale decline in greenness of the analyzed areas by calculating the "Enhanced Vegetation Index".

NASA elaborates on their website: "Scientists use the satellite-derived "greenness" of forest regions as one indicator of a forest's health. While this study looks specifically at the impact of a persistent drought in the Congo region since 2000, researchers say that a continued drying trend might alter the composition and structure of the Congo rainforest, affecting its biodiversity and carbon storage."

Lead researcher Liming Zhou of University at Albany, State University of New York said: "It's important to understand these changes because most climate models predict tropical forests may be under stress due to increasing severe water shortages in a warmer and drier 21st century climate."