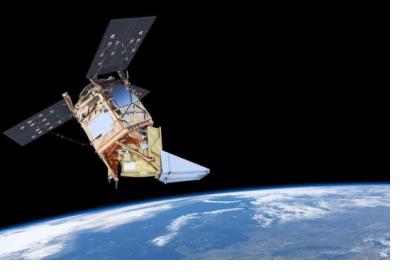 The first Copernicus mission dedicated to monitoring the atmosphere was launched successfully on 13 October.

The Sentinel-5P will measure global levels of atmospheric trace gases that affect air quality such as Ozone (O3), Sulfur Dioxide (SO2) and Nitrogen Dioxide (NO2), as well as aerosols in the Earth’s atmosphere. The data, which will be openly accessibly, will allow for the development of new air quality and atmosphere-related applications. It will also be used by the Copernicus Atmosphere Monitoring Service (CAMS), which is operated by the European Centre for Medium-Range Weather Forecasts (ECMWF).

Using a TROPOspheric Monitoring Instrument (TROPOMI) jointly developed by research institutions from the Netherlands and Airbus Defence & Space, the satellite will map global ozone on a daily basis. The sensor uses a higher resolution than previous instruments and will allow collecting more accurate atmospheric data to improve climate models and pollutant tracking and forecasting.

After an initial exploitation phase of six months, the satellite will enter into the exploitation phase that will cover the remaining duration of the mission, which has a planned operational life span of seven years. During the exploitation phase, data from Sentinel-5P will become accessible via EUMETSAT access points, besides being integrated in the CAMS and Copernicus Climate Change Service (C3S). Full Operations Capacity is expected to be reached within 14 months of the launch.

The Sentinel-5P aims to ensure data continuity between the European Space Agency’s Envisat and NASA’s Aura missions, the latter having already exceed its nominal lifetime, and the Copernicus Sentinel-5, scheduled for launch in 2021.