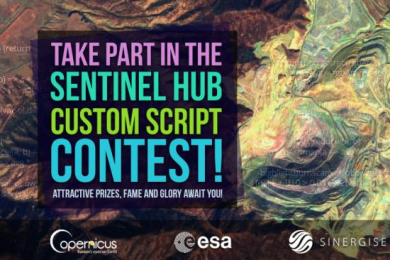 Sentinel Hub’s Earth Observation (EO) browser is hosting its second round of contests for custom scripts to better visualize and analyze the Earth’s surface. EO Browser, developed by Sinergise in close cooperation with the European Space Agency (ESA), brings together petabytes of data from many satellite platforms - from ESA’s Copernicus programme to NASA’s Landsat missions.

The competition is open from 15 October 2019 to 15 January 2020, and calls for submissions of JavaScript scripts, which can be input into EO Browser's “create custom rendering” visualization tool. This script must be designed to work with one of the eight satellite platforms available on EO browser.

The last Sentinel Hub Custom Script Contest was won by a script for best visualizing deep moist convection, an atmospheric condition associated with tornadoes, hurricanes, and cyclones. This disaster management and prevention script was joined in the competition by other disaster focused scripts which received notable mentions, such as a flood detection script and a fire boundary script.

Interested applicants should submit their script along with information about its use, its false detection problems, and its visualization in EO browser, as well as full references and citations for any other work used. The scripts will be judged by seven remote sensing and EO Vrowser experts in originality, scientific relevance, applicability, commercial potential and even visual appeal - although they do note that the sharing of scientifically relevant knowledge is the main goal of the competition.

Up to three applications are allowed per person or group and student groups are highly encouraged to participate.