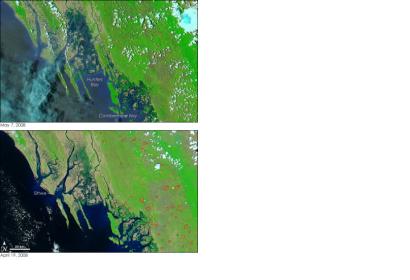 A study conducted by the Berlin-based think-tank Global Climate Forum (GCF) with the support of the University of Southampton includes a comprehensive global simulation result on future flood damages to buildings and infrastructure in coastal flood plains. The researchers conclude that over the next couple of decades the financial damages from storm surge flooding may rise from $10-$40 billion a year to up to $100,000 billion per year.

An explanation for this trend could be the overall rising sea level and the population and economic growth in coastal zones. Africa and Asia might be particularly endangered because of the rising population in big coastal cities like Shanghai, Manila and Lagos.

"If we ignore this problem, the consequences will be dramatic," explains Jochen Hinkel from GCF and the study's lead author. The study predicts that by 2100 up to 600 million people could be affected by coastal flooding if no resilience measures are met. If such measures are put in place the damages could be reduced to $80 billion per year.