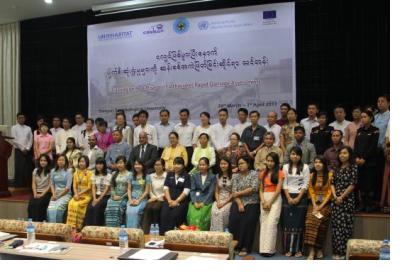 The Centre for Space Science Technology and Education for Asia and the Pacific (CSSTEAP), UN-HABITAT, and UN-SPIDER conducted the training course entitled ‘Post Disaster (Earthquake) Rapid Damage Assessment’. It was held in Yangon, Myanmar, from 28 March to 2 April 2017. Its objective was to enhance the capacity for rapid damage assessment using geospatial and Earth observation technologies.

The event was conducted as part of the UN-SPIDER’s technical advisory services which began in 2012 in the case of Myanmar.  The training course was hosted by the Yangon Technological University in collaboration with Ministry of Social Welfare, Relief and Resettlement, and the Myanmar Engineering Society and Myanmar Earthquake Committee. It was organised as a recall of the Chuak earthquake in August 2016 that severely damaged some of the religious structures in the heritage site of Bagan, with the purpose of developing capacities in use of earth observation and geospatial technologies for post-disaster rapid damage assessment.

The course included theory and hands-on sessions focusing on the use of Earth observation to provide critical information on the basis of rapid mapping efforts in case of earthquakes. The participants learned about the role of international emergency mechanisms established by space agencies such as the International Charter Space and Major Disasters and Sentinel Asia; as well as on the use of FOSS4G (Free and Open source software’s for Geoinformatics), latest trends of digital image processing such as textures, colour spaces etc., 3D modelling using software TRIVIM and mobile based field data collection using crowd-sourcing techniques based on open-source software (Open Data Kit).