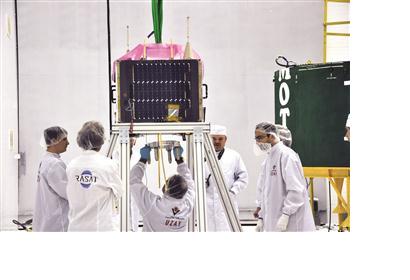 A total of 17 satellite programs are expected to come into orbit from 2012 to 2020. Over the next five years satellite contracts could amount to $2 billion, according to a space industry expert based in Turkey.

The Turkish government has devised an ambitious road map for the country’s multiple satellite programs through 2020. According to the road map, a total of 17 Turkish satellites will come into orbit from 2012 to 2020. A space industry expert based in Turkey said the next five years’ satellite contracts would amount to $2 billion. “This is a niche market with strong prospects due to Turkey’s genuine ambitions in space technology,” he said.

The road map comes after the government set up a Space Technologies Directorate under the supervision of the Transport Ministry last November. Officials said this office will later become the country’s first National Space Agency. There is a multitude of space actors in Turkey, but experts hope efforts will be better coordinated with the establishment of the National Space Agency. Current organizations include the State Planning Organization, the Ministry of Transportation, the communications satellite operator Türksat, the state scientific research institute Tübitak and the defense procurement agency the Undersecretariat for Defense Industries. Tübitak cooperates with the Federal Russian Space Agency Roscosmos, German aerospace center DLR, Britain’s space agency BNSC and the Netherlands space office NSO. Defense companies Aselsan, Roketsan and Turkish Aerospace Industries, as well as three universities, are also involved in space programs.

The Turkish government identified space as a priority area in scientific and technological progress in 2004. As part of this strategy it has sought to develop programs in line with the Human Space Technology Initiative, an effort under the framework of the United Nations Program on Space Applications. The effort promotes international cooperation in human space lift and space exploration-related activities. In 2009, Telespazio, a joint venture between Italy’s defense giant Finmeccanica and France’s Thales, signed a deal worth nearly 250 million euros (about $345 million) for the Turkish military satellite.