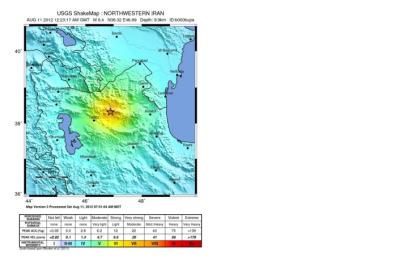 On Saturday 11th August, two earthquakes measuring 6.4 and 6.3 on the moment magnitude scale rumbled through the highly populated region of Azarbayjan-e Khavari in Iran, 53km from Tabriz.The earthquakes and killed 306 people and injured 3,037, according to Health Minister Marzieh Vahid Dastjerdi. He also said that "we are continuing the search for bodies", so an increase on the death number is not discarded. More than 16,000 people have lost their houses, they are having temporary shelter in 3,000 tents and thousands of blankets, food and water have been distributed.