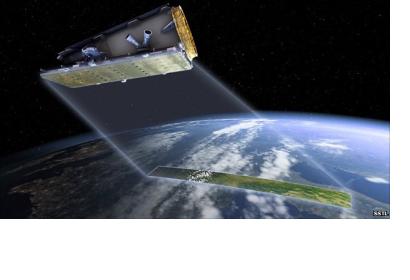 The UK government is to kick-start an innovative project to fly radar satellites around the Earth, with an initial investment of £21m.

Radar spacecraft can see the planet's surface in all weathers, day and night.

It is hoped that a series of satellites could eventually be launched, enabling any place on Earth to be imaged inside 24 hours - a powerful capability.

The radar money is part of a £200m boost for science announced by the Chancellor in his Autumn Statement.

George Osborne's investment will be matched by industry.

Radar is one of the most useful tools in Earth observation because of its ability to track objects and events on the ground even when there is thick cloud.

The project being backed by government has been developed by Surrey Satellite Technology Limited (SSTL), which specialises in building small, low-cost spacecraft, and its parent company, Astrium, which makes some of the biggest satellites in orbit today.

Engineers at the two firms have produced a compact radar platform they believe could win many overseas orders, and are keen to demonstrate its capabilities in space.

The new S-band radar satellite is called NovaSar-S ("Sar" stands for synthetic aperture radar). It is a 3m-by-1m spacecraft with a plank-like appearance, weighing just shy of 400kg.

Engineers have found a way to make it considerably smaller than most radar platforms in operation today, and with a price tag that would also be a fraction of that charged for bigger radar satellites.

SSTL says it can build, launch and insure a NovaSar-S for a customer for less than £45m.

Mr Osborne's investment, matched by private sector cash, will enable the first NovaSar-S to be put in orbit.

Assuming this pathfinder meets its design performance and begins to earn money from the sale of its imagery, SSTL plans to launch further spacecraft, to create a constellation in the sky.

Prof Sir Martin Sweeting is the executive chairman of SSTL. He told BBC News: "We're hoping we can use this commitment from the UK government to go out to our international customers, who we know have had an interest in radar for a long time, and get them to participate in the first mission, to start with, but then to take up one or two of the other satellites so that we can build a constellation in orbit."

A NovaSar-S will produce what are termed medium-resolution images, meaning details on the ground larger than 6m across would be discernable.
Economic growth

NovaSar-S would have a number of viewing modes that could enable it to perform a wide range of roles, from flood monitoring and land cover management to disaster mapping and maritime enforcement - notably ship tracking and oil spill detection.

An application where a constellation of NovaSars could find a particularly useful role is in monitoring forests - or to be more precise, in monitoring deforestation. The cloud cover associated with rainforests makes radar a game-changer, allowing repeat viewing of an area whatever the weather.

Ministers have been very impressed with the results of the R and D work and believe a small investment from taxpayers could help leverage big returns for "UK plc".

It is a model with good precedent. A decade ago, the government put £5m into helping SSTL develop its technology for optical satellites - seed funding that subsequently helped the Guildford-based company win international orders in excess of £200m.

"Radar technology is quite challenging, and so having government investment to get a demonstration mission up and running is amazingly good news," said Sir Martin.

"It's also a good signal to British industry of the government's commitment to space as an important sector that can provide both national security in the broadest sense but also drive the economy forwards with export earnings."

British space firms have been identified by ministers as an important area for growth in the economy. This view is buttressed by the fact that the sector managed to increase its turnover, year on year, right through the recent recession.