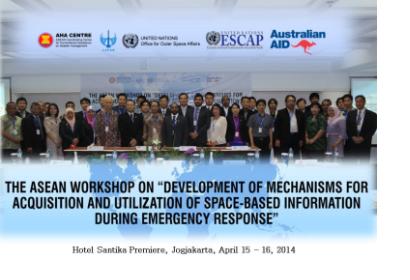 UN-SPIDER and its Regional Support Office in Indonesia, LAPAN, jointly conducted the ASEAN workshop "Development of mechanisms for acquisition and utilisation of space-based information during emergency response" from 15 to 16 April 2014 in Jogjakarta, Indonesia. The workshop was furthermore supported by the AHA Centre, ESCAP and Australian AID.

55 participants from eight ASEAN member states and disaster managers from provinces of Indonesia participated in the Workshop. Experts from Pacific Disaster Centre, National Disaster Reduction Centre of China, JAXA (Sentinel Asia), Asian Disaster Reduction Centre, DigitalGlobe and LAPAN also participated in the workshop. The remote sensing agencies and disaster management officials from each country were invited to the workshop.

Prior to the workshop, UN-SPIDER circulated a pre-conference questionnaire related to the four defined objectives of the workshop and received responses from the participants. The assessment of the questionnaire provided insight into the situation in the ASEAN countries on these four points and in ensured sustained engagement of the participants in the workshop. During the two days of the workshop, each of the objectives was thoroughly discussed after relevant presentations by the experts. At the end of the workshop, the draft document "mechanisms for acquisition and utilization of space-based information during emergency response" was prepared and discussed with the participants. All key suggestions, challenges and key considerations for future interventions were incorporated in a participatory manner.

The final document will be prepared within three weeks and shared with the member countries and AHA Centre. A follow up action at regional level and country level based on outcomes of the workshop is planned.