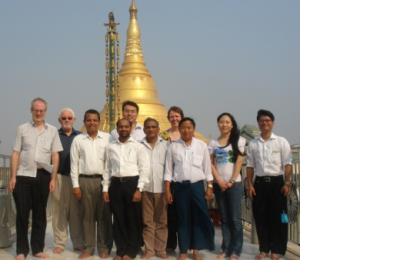 UN-SPIDER successfully concluded its Technical Advisory mission to Myanmar, which was conducted from 19 to 23 March at the invitation from the Government through the Relief and Resettlement Department (RRD) of the Ministry of Social Welfare. The mission was headed by Mr. Shirish Ravan and included experts from the UNOOSA/UN-SPIDER Office in Beijing, UNESCAP, the Centre for Space Science Technology Education in Asia and the Pacific (CSSTEAP), the National Disaster Reduction Centre of China, United States Geological Survey (USGS), the University of South Wales, Australia, the Asia Pacific Space Cooperation (APSCO) and Mekong Consultants Co. Ltd. The mission also benefited from advisory support provided by UN-OCHA.

Like other countries in the Bay of Bengal, Myanmar is exposed to tropical storms and corresponding storm surges; droughts, earthquakes and tsunamis. RRD has a mandate focusing on emergency response and disaster risk reduction, and wishes to establish a centre that will provide decision support to authorities. To this end, the mission included meetings with representatives of RRD and other government agencies. To support these efforts, mechanism such as the International Charter Space and Major Disasters were presented to the Myanmar agencies.The mission also included a meeting with the United Nations Resident Coordinator, who is looking forward to incorporating the recommendations identified in the mission into the UN Strategic Framework of Myanmar.

The mission allowed Myanmar agencies to exchange and establish links with the institutions represented by the team members. At the same time, the mission members were able to get in contact not only with representatives of RRD but with many stakeholders of the Myanmar disaster management, including the Ministry of Science and Technology, the Ministry of Water Resources, the Survey Department, the Forest Department, the Department of Meteorology and Hydrology, the Remote Sensing Department (Mandalay), Myanmar Engineering Society and Geosciences Society, the Fire Service Department, the Japanese International Cooperation Agency JICA, the Red Cross, and various United Nations agencies.

The mission included an inter-institutional workshop with participants from these institutions to deduct lessons learned on current uses of space-based and geo-spatial information. The workshop aimed at supporting experts to identify recommendations on how to improve access to and use of such type of information in all phases of the disaster management cycle, aiming also at being better prepared for the 2012 cyclone season.