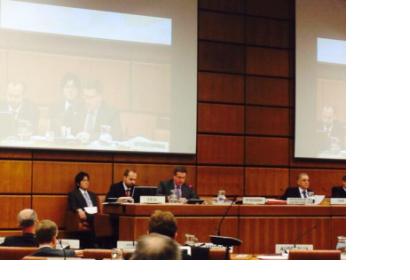 UN-SPIDER’s Senior Programme Coordinator, Mr Luc St-Pierre, addressed the attending delegations of the 57th session of the Committee on the Peaceful Uses of Outer Space (COPUOS) on 12 June 2014 in a technical presentation.

Mr St-Pierre presented recent UN-SPIDER activities in the areas of technical advisory support, such as missions to Bhutan, El Salvador, Ghana, Indonesia, Kenya, Malawi, Vietnam and Zambia, as well as training programmes delivered in Bangladesh, the Dominican Republic, Mozambique and Sudan. He also highlighted to the delegates that UN-SPIDER had become active in emergencies such as typhoon Bopha in Palau and the Philippines, typhoon Haiyan in the Philippines, or floods in Iraq.

The Committee on the Peaceful Uses of Outer Space was set up by the General Assembly in 1959 ( resolution 1472 (XIV) ) to review the scope of international cooperation in peaceful uses of outer space, to devise programmes in this field to be undertaken under United Nations auspices, to encourage continued research and the dissemination of information on outer space matters, and to study legal problems arising from the exploration of outer space. The Committee and its two Subcommittees meet annually to consider questions put before them by the General Assembly, reports submitted to them and issues raised by the Member States.