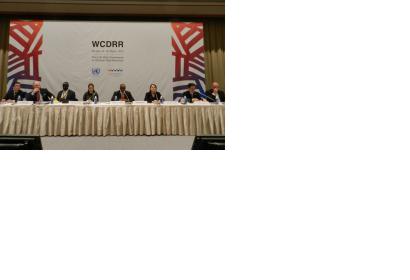 Experts of UN-SPIDER as well as UNOOSA's director Simonetta Di Pippo have co-organized and contributed to a working group on early warning during the Third UN World Conference on Disaster Risk Reduction (WCDRR) on Saturday, 14 March. WCDRR was opened on 14 March and will continue until 18 March.

In her statement, Di Pippo stressed the significant progress in strengthening multi-hazard, end-to-end early warning systems over the past ten years. "Progress has been particularly evident in the development of observation and monitoring systems and the strengthening of communication/information on risks, as part of the overall efforts to strengthen disaster resilience."

She elaborated: "Earth observation is more and more contributing to track the temporal and spatial evolution of hazards such as tropical storms, hurricanes and typhoons with novel sensors and high-resolution imagery. Satellite telecommunications are the backbone for the transmission of data from sensors on the ground or buoys at sea to observatories, and to transmit warnings across oceans and seas as quickly as possible. ICTs are allowing those at risk to receive warning messages through smart telephones and decision makers to view a variety of information relevant for early warning systems using geo-viewers."

More background information and documents are available on the WCDRR website.