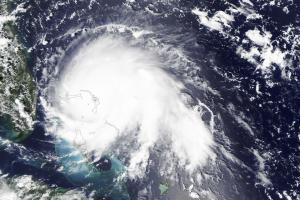 Hurricane Dorian, a category 5 hurricane, made landfall at Elboy Cay, Abaco, Bahamas, on 1 September. The hurricane had devastating effects, especially on the islands of Grand Bahama and Abaco, as they had prolonged exposure to extreme hurricane force winds, storm surges, flooding and intense rainfall.

The Abaco Islands and Grand Bahama, in the north of the archipelago, were battered by the storm for two days which decimated whole areas, leaving houses without roofs, scattered debris and flooding as up to 35 inches of rain fell.

Dorian is the strongest hurricane on record to make landfall in Bahamas and caused massive storm surges and flooding of entire villages, destroyed thousands of homes, downed power and telecommunication lines, put health facilities out of action, made roads impassable and contaminated the drinking water system with salt water.

Both the International Charter Space and Major Disaster and the Copernicus Emergency Management Service - Mapping have been activated for the event.

Through its UN-SPIDER programme, the United Nations Office for Outer Space Affairs is working closely with space technology company Maxar on developing information products based on Maxar's high-resolution imagery to support emergency relief efforts in the Bahamas. Under its Open Data programme through which is assists the humanitarian community during crises, Maxar has released pre-event imagery for Hurricane Dorian, which will be followed with post-disaster images. The imagery is available for downloading on its website.
The United Nations Office for Outer Space Affairs, as the UN office responsible for promoting international cooperation in the peaceful uses of outer space, signed an agreement with Maxar (formerly Digitalglobe) in 2015 to collaborate on satellite imagery and geospatial solutions for development. Under the agreement, Maxar provides advisory services on remote sensing imagery and geospatial analytics and works with UNOOSA to advance and accelerate adoption of geospatial and satellite imagery-based analytics across the entire United Nations System.