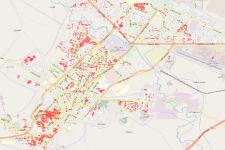 On 12 November 2017 a 7.3 magnitude earthquake struck close to the town of Sarpol-e-Zahab in the Kermanshah province of the Islamic Republic of Iran. The earthquake ranked as the strongest of 2017 and among the deadliest for the decade, killing over 600 people. Fatalities were spread across the border province and destruction of local infrastructure, healthcare centers and emergency services made response harder. This Recommended Practice will outline the process for obtaining and processing SAR data before and after the 2017 earthquake for the purpose of creating actionable and helpful maps for disaster managers to make informed decisions.

The aim is to identify buildings based on their high backscatter from SAR sensors. This identification process will be applied both before and after the earthquake to highlight areas of major building change (i.e. destruction). The information will then be overlaid over relevant open-source information to produce useful maps for disaster stakeholders such as major street blockages and heavily hit neighborhoods.

This Recommended Practice was developed by UN-SPIDER for the case of Kermanshah, Islamic Republic of Iran. The major earthquake that struck there in 2017 killed over 600 people in the province. Overall, 12,000 buildings were damaged, as shown by amateur footage shared after the event. This Recommended Practice can support the disaster management activities such as emergency response during or immediately after a disaster event in order to provide spatial information about impact in the urban infrastructure or people affected.

For first responders, knowledge of which streets were blocked by rubble, is key to saving time and lives. Two years after the quake, nearly 5,000 people still found themselves unable to return to their homes; (Yousefi et al., 2018) during the disaster recovery phase, information about which areas were affected most could help disaster managers in their efforts to prioritize aid and rebuild quickly.

This Recommended Practice can be used with any SAR images of urban areas. For this practice, the Copernicus Programme’s Sentinel-1 satellite data is used. The selected data has a polarization of VV VH, in preprocessing only VV will be singled out, which has the clearest results for differentiation of urban and infrastructure areas from other areas. (Deepthi et al., 2018) It is necessary for the before and after images to have the same orbit direction (ascending or descending), it is beneficial if they have the same or close orbit tracks (relative orbit numbers).

This methodology can be applied to urban areas with large building destruction. Errors can be introduced as outside debris enters the area or flooding occurs, thus it is not recommended for hurricanes, tornadoes or tsunamis. Errors can also be introduced through precipitation change or vegetation growth, thus knowing the urban-agricultural layout of the region of interest and knowing about major snowfall or rain in the time range is important to avoid errors. 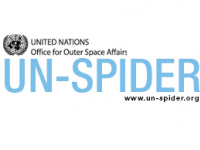