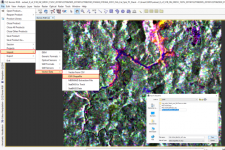 Floods and landslides are the first and fourth most frequent disasters around the world (Petley, 2012). There are several examples of downstream flooding caused by massive mudslides where rapid mapping is an indispensable tool for supporting disaster management activities by civil protection authorities.

Since July 2014, the Copernicus programme of the European Union has been providing free-of-charge access to Sentinel-1 radar data coveirng the entire world. This allows for the exploration of new applications to strengthen hazard monitoring and disaster mitigation activities.

This UN-SPIDER Recommended Practice emphasizes the use of SAR data during and after a disaster crisis, since optimum atmospheric conditions for optical satellite images are not always available. In the example provided here, it is used to map the mudflow following the dam collapse that occured on 25 January 2019 at Brumadinho, Brazil.

The aim is to identify the area affected by mudslide and associated floods using the backscattering information from "magnitude" SAR data. This step-by-step procedure applies a ratio-change detection technique and principal component analysis using SAR images before and after the dam collapsed.

This Recommended Practice was developed by a visiting scientist from the Autonomous University of Mexico State (UAEM) who beneiftted from the support provided by the National Council of Science and Technology (CONACYT-Mexico). This method was applied for a massive mudflow that occurred 25 January 2019 in Brumadinho, Brazil, where a dam collapsed in the Minas Gerais mining complex triggering a mudslide and causing the death of 232 people. A large volume of sludge flooded at least 12 km downstream, burying mining infrastructure and nearby workers' houses.

The methodology can be applied over massive mudslides and associated floods, also when large areas of sludge-water are involved. It is essential to mention that the proposed method is focused on extracting the most significant amount of backscattering information linked to the surficial roughness of the mudslide using the magnitude information of SAR image. To achieve this task, we use change detection techniques (Log- Ratio) and principal component analysis (PCA).

The applicability of PCA to detect massive mudslides (and associated floods) lies in applying digital treatment using the magnitude values of SAR images acquired on different dates. PCA implies a data regrouping, where towards the first "out band components" the variance is maximized, which means that the more significant pixel information is keeping; while towards the last "out band component," all noise or redundant information is separated. This method is highly recommended when the flooded areas cannot be detected by the traditional change detection analysis due to soil moisture conditions, differences between water bodies or by the large volume of sediments transported during a flood.