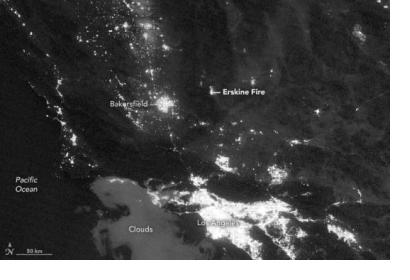 A wildfire called Erskine started on 23 June 2016 in California due to an unknown cause. It burnt 18,368 hectares of forest and 250 structures in the southwest of the United-States, causing the death of two people.

The space-based images have been captured by the Suomi NPP satellite of the National Aeronautics and Space Administration (NASA). Thanks to the day-night band (DNB) of the Visible Infrared Imaging Radiometer Suite (VIIRS) on the satellite, the latter could capture the glow of the wildfire and locate with precision its geographical extent.

According to the National Interagency Fire Center, the number of wildfires expected for the summer 2016 could be bigger than usual due to the excessive heat in some regions in the United-States.