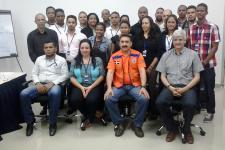 This training course targeted the members of the EIGEO team which has been established by the National Emergency Commission of the Dominican Republic to generate relevant space based information.  The EIGEO team includes professionals from more than 20 institutions and has been institutionalised through an MoU among all the institutions that contribute to it.

The training course, conducted by experts from fhe Federal University of Santa Maria of Brazil (UFSM) and the Agustin Codazzi Geographic Institute (IGAC), focused on the two Recommended Practices on the VCi and the SVI which have been incorporated in the UN-SPIDER Knowledge Portal.  The training was conducted as part of the efforts conducted by UN-SPIDER, IGAC and UFSM as part of the project entitled ¨Strengthening Early Warning Systems for Drought¨ (SEWS-D)

Members of the EIGEO Team in the Dominican Republic

This training course was conducted as a way to train the members of the EIGEO team on the use of the two Recommended Practices which have been incorporated into the UN-SPIDER Knowledge Portal that focus on drought.  The Dominican Republic, like other countries in Central America and around the world, is facing severe droughts which have been worsened by the 2015-2016 El Niño event.

The training course strengthened the skills of the EIGEO members on the generation of information on the spatial and temporal dynamics of droughts in the Dominican Republic making use of the Vegetation Condition Index (VCI) and the Standard Vegetation Index (SVI) or Vegetation Anomaly, which are calculated through a comparison of MODIS satellite imagery between 2001 and 2016.