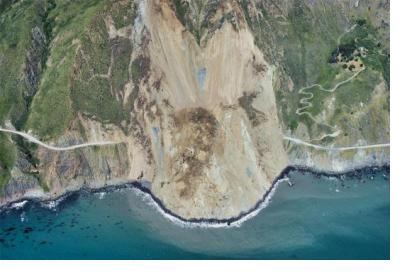 While several studies have already highlighted how global warming and its consequences are predicted to increase the frequency and magnitude of geohazards such as landslides, the relation between ongoing climate shifts and landslide behaviour is still difficult to assess, especially due to uncertainties in both models. In a new research paper, researchers at NASA's Jet Propulsion Laboratory and collaborating institutions have now documented the transition of a stable, slow-moving landslide into catastrophic collapse for the first time.

Their  observations lasted eight years and took place on the California Coast Ranges, which, due to their morphological structure, are an ideal natural laboratory to investigate how stress and fluid pressure changes govern the stable and unstable sliding of landslides. In recent years, more than 650 slow-moving landslides have been identified and mapped in the area. Yet, on May 20, 2017, the Mud Creek landslide suddenly failed catastrophically, destroying California State Highway 1 and causing serious damages. The collapse happened on a dry day following a prolonged period of heavy rainfall, and that’s the aspect that most interested the researchers.

The team of researchers used satellite and airborne InSAR data to measure the deformation history of the Mud Creek landslide between 2009 and 2017 and two other landslides in the California Coast Ranges between 2015 and 2017. Based on the data, they modeled precipitation-induced changes in pore-fluid pressure using a simple homogenous 1D diffusion model. Then, they used remote sensing observations and hydrologic models to explore interactions between precipitation and landslide kinematics.

The team ’s results show that, given the predicted increase of extreme precipitations with a warming climate, it is expected to become more common for landslides to transition from stable to unstable motion, and therefore a better assessment of this destabilization process is required to prevent collapses.

A shift from drought to extreme rainfall drives a stable landslide to catastrop…
Wed, 02/20/2019 - 09:40
United States of America
Landslide