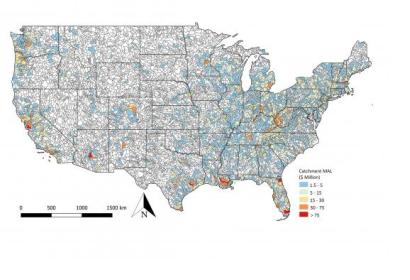 Researchers expanded an existing statistical model, based on U.S. Geological Survey (USGS) river flow data, to simulate a thousand years of potential flood events. By calculating the damage for each event in dollars, they were able to estimate the probability of the United States suffering particular annual flood damages.

Traditional risk flood analysis models assume that the impacts on the entire flood-affected area are the same, but flooding can be more severe in some areas than in others, even during the same flood event. At national scales, traditional risk analyses can only estimate the average annual loss. To estimate the total annual losses that might occur in more extreme flooding years, the risk analysis needs to be based on more realistic spatial patterns of flooding.

This probability-based analysis is an improvement over traditional models that can only estimate the average loss. In previous models, loss from any extreme event is diluted in an analysis and spread over all years. In this model, potential loss is calculated each year as a probability.

Researchers confirmed that a flood event’s impact can also vary in adjacent areas, and the rule is often that the more extreme the event, the more localized the greatest destruction.

According to the study, the largest contributors to national average annual loss are from heavily populated areas such as New Orleans, despite the existence of flood defenses.This is due to the severe damages that can occur if an event of above-average magnitude takes place.