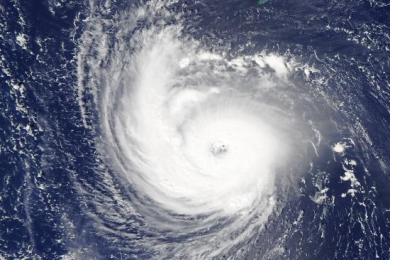 According to a new study by scientists from NASA and NOAA, tropical cyclones stall more frequently and stay longer near the coastline. This potentially leads to more precipitation over confined locations and thus an aggravation of tropical cyclone hazards for coastal populations.

In the new study, scientists Hall and Kossin examined all tropical cyclones from 1944-2017 in the National Hurricane Center's HURDAT2 database to analyze the position and calculate the average forward speed of each storm that has reached the coastal regions and to investigate the direction of the storm track. They found that 66 storms in the North Atlantic stayed in a coastal region for more than two days. Almost half of these 66 stalls appeared in the last third of the 74 years they analyzed, while only 17 appeared in the first third. In addition, they found that long-lasting storms were more likely to contain meanders.

Both reduced speed and increased directional deviations contribute to increasing the likelihood of a stalling storm in the coastal region. The effect of reduced speed is that the time a storm spends over a region is extended, whereas directional deviations have the effect of increasing the likelihood of meandering within the region before leaving.

Besides, researchers found that especially storms that were already moving very slowly were more susceptible to meanders and decelerations. According to rain gauge data, these stalled storms caused more precipitation than any other type of storm. NOAA atmospheric scientist Jim Kossin explains that the main problem here is precipitation flooding, which represents the greatest hurricane hazard regarding mortality risk.

Scientists are still trying to figure out what the reasons might be for the increased stalling in North Atlantic storms. They suppose that weaker winds in the tropics, where Atlantic storms normally begin, do not push storms as hard by the current that moves them around. According to Hall, this is a signal for climate change. A predicted effect of climate change is that air masses worldwide will move at a slower pace. This is due to rising global temperatures and thus faster warming of the Arctic compared to the tropics, also known as Arctic amplification. The decreasing temperature differences between the tropics and the high latitudes as well as the decreasing air pressure differences will reduce the wind.