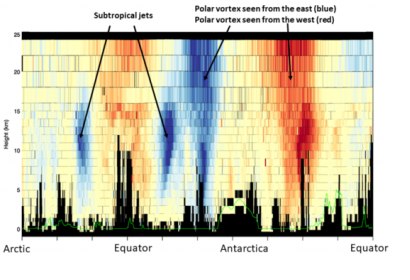 The European Centre for Medium-Range Weather Forecasts (ECMWF), after months of careful testing, has started to operationally assimilate data from the European Space Agency's Aeolus satellite in its daily weather forecasts. Aeolus measurements have been considered ready for operational use as early as 14 months after the satellite launch, which is unusual for data collected from a new type of satellite. Aelous provides accurate and near-real time measurements that can improve weather forecasting and contribute to better preparedness for possible hazards.

The Aeolus satellite is the first of its kind as it is able to calculate atmospheric winds in cloud-free areas or winds throughout vertical wind columns. To date, satellites could estimate winds only from the movements of clouds, leaving gaps in observations where there are no clouds. Aeolus can improve weather forecasts, especially in the tropics, in the southern hemisphere, over the oceans and in polar areas, where atmospheric winds are currently less covered by conventional wind observations than the northern hemisphere. With ongoing and near-real time observations, Aeolus can provide high-quality short and medium-range forecasts (between three to ten days ahead). Aeolus can also produce useful information on ocean salinity and frozen expanses as well as insights into the wind’s influence on heat and soil moisture within the Earth's surface. The measurements from the satellite can contribute to long-term climate research and help scientists better understand global environmental challenges such as extreme natural disasters, global warming, and air pollution.

Aeolus is a pioneering satellite mission as it uses a novel technology and a new approach to measuring wind from space. The Atmospheric Laser Doppler Instrument, called Aladin, comprises powerful lasers, one of the largest telescopes ESA has put into orbit and very sensitive receivers that measure the minute shifts in wavelength of light generated by the movement of molecules and particles in the atmosphere caused by the wind. The ultraviolet lidar – “laser radar” – emits 50 short, powerful pulses of ultraviolet light per second magnified by a 1.5-m-diameter telescope to shine through the entirety of the atmosphere from 320 km away in space. Within three one-thousandths of a second, this telescope can gather the resulting laser backscatter from aerosol droplets, dust particles, water vapor, and actual air molecules across different atmospheric layers. This "Doppler shift" is measured to derive wind velocities down to a few meters per second, taking a fresh sample every 200 km.

Once the data from Aeolus is collected, ESA has to carefully calibrate and validate it before including it in forecasts. Part of this process involves gathering measurements of wind, aerosols, and clouds from the ground, aircraft and from other satellites to compare with measurements being delivered by Aeolus. Combing Aeolus data with other in situ and satellite observations can reduce small “biases” closely correlated with small variations in the temperature distribution across the large mirror used in the Aeolus instrument’s telescope. As is normal for any satellite mission, successfully correcting these biases is an important part of optimizing the use of the satellite’s observations. As the ECMWF has shown, once Aeolus data is combined with short-range forecast information in a process called data assimilation, the short-range forecasts used are improved.

ESA initiated the Aeolus program in 1999 and originally intended to launch it in 2007.  However, the mission took more than two decades to be finished as engineers encountered problems on the way. The biggest one was that the beam intensity of the laser was actually destroying the laser’s optical elements in less than six hours of operations. Since this is such novel and challenging technology, ESA had to set up two new labs, call in additional DLR German Aerospace Center support and produce entirely new technical standards. Aladin’s development has given ESA its world-leading Optics and Opto-Electronics Labs, along with a set of ISO-certified laser development standards for other laser-based missions, starting with the EarthCARE mission for clouds and aerosol monitoring.

The 1,360-kilogram Aeolus satellite was eventually launched in August 2018 on Europe’s Vega rocket from Kourou, French Guiana, and started collecting data of Earth's winds on 3 September 2018.

Aeolus satellite images and data are available on the Aeolus Online Dissemination Service, and a more in-depth and technical overview of the Aeolus mission can be found here.