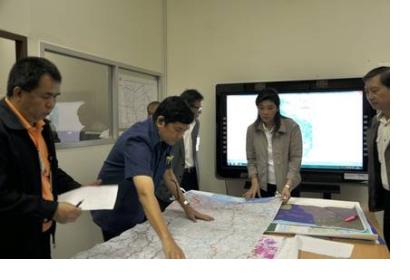 The Geo-Informatics and Space Technology Development Agency (GISTDA) and the Ministry of Science and Technology (MOST) has teamed up to establish a Geo-Informatics Operation System and Satellite Data Centre as a response to the problems posed by Thailand’s worst flooding in decades.

The data centre will make use of modern Geo-Informatics technology in order for concerned government authorities to make well-informed decisions during times of natural calamities.

The MOST, Hydro and Agro Informatics Institute, Royal Irrigation Department, Department of Disaster Prevention and Mitigation, are among the many agencies that are actively making use of satellite image maps from GISTDA as a significant tool for monitoring the effects of the recent disaster.

The data centre will make use of high resolution satellite imageries such as RADARSAT, which has the capability to penetrate cloud and haze, and optical satellite data such as THEOS, IKONOS, Quickbird, WorldView, and Geoeye, which will be used to evaluate the damaged agricultural and household areas.

Meanwhile, in order to facilitate relief operations, GISTDA has published online its satellite image maps to disseminate real-time information to the public.