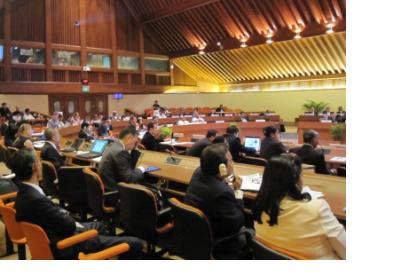 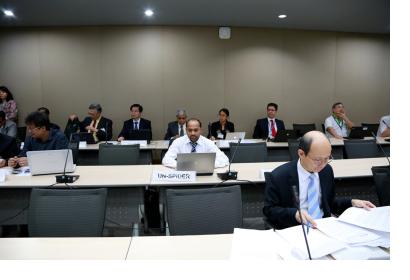 From 26 to 27 November 2013, UN-SPIDER participated in the 17th Session of the Intergovernmental Consultative Committee (ICC) on the Regional Space Applications Programme for Sustainable Development (RESAP) in Bangkok, Thailand. The meeting provided an overview of the work progress of RESAP during 2012-2013 and work plan for 2014-2015. It also discussed how to implement a Regional cooperative mechanism for disaster monitoring and early warning called ‘Drought Mechanism’.

The Drought Mechanism is now supported by two service nodes, ISRO (India) and National Remote Sensing Agency (China), which will provide data and technology. Mongolia and Sri Lanka have been selected as the pilot countries to implement the Drought Mechanism, although Malaysia and Philippines have also volunteered during this ICC meeting.

UN-SPIDER also took part in the back-to-back High Level Decision Makers Meeting (HLDM) on Implementing the Asia-Pacific Year held on 28 and 29 November 2013 in Bangkok. During this event the implementation of the Asia-Pacific Plan of Action for Applications of Space Technology and Geographic Information Systems for Disaster Risk Reduction and Sustainable Development 2012-2017 was discussed. The discussion was mainly focused on the provision of near real-time satellite imagery to countries affected by severe disasters and operationalization of the regional cooperative mechanism for disaster monitoring and early warning, particularly drought.

However, the meeting also paid special attention to topics such as capacity-building to address the main technical gaps in developing countries, in their use of space technologies for sustainable development and research as well as policy analysis on the application of emerging technologies and available resources.

The role of UN-SPIDER was acknowledged by several member countries and ESCAP throughout these meetings, during which UN-SPIDER updated the member states on the Programme's latest efforts during the 2nd meeting of the Committee on Disaster Risk Reduction. Furthermore, reports have taken note of the collaboration between ESCAP and UN-SPIDER for implementing the action envisaged within the 5th Year Action Plan.