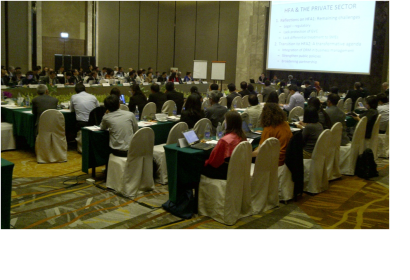 During the IAP meeting, the pre-conference workshop proposed by UN-SPIDER and GFDRR (World Bank) at 6th AMCDRR was confirmed. This workshop is scheduled for 22 June at 09:00-12:30.

The meeting was also an opportunity for ISDR, ESCAP and other UN agencies to plan interventions to ensure that Disaster Risk Reduction (DRR) is well reflected in the Sustainable Development Goals (SDGs). Additionally, UN-SPIDER discussed with JAXA, Sentinel Asia and ESCAP to make sure the topic of Space is given due consideration in the 6th AMCDRR and in the discussions about the post 2015 Framework for DRR during the World Conference on DRR at Sendai, Japan in March 2015.