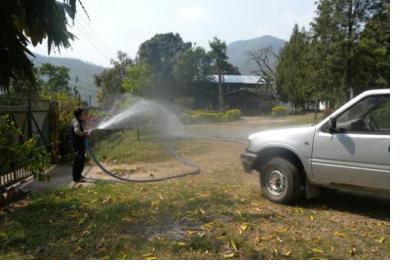 The SERVIR-Himalaya Initiative of the International Centre for Integrated Mountain Development (ICIMOD), Regional Support Office of UN-SPIDER, in collaboration with the Department of Forests (DoF) of Nepal, has conducted an awareness campaign at field level in the most fire prone districts of Nepal.

The awareness campaign took place during the week of 16 to 23 March 2015 in six different districts of the Terai region: Kanchanpur, Kailali, Bardia, Chitwan, Makwanpur, and Parsa. More than 290 participants including forest range officers, Nepal Army, local fire fighters, and media learned the working process of the Forest Fire Monitoring and Detection System, developed by ICIMOD under the SERVIR-Himalaya framework.

The region of Terai is affected by long dry summers that produce high number of forest fires, reaching around 30 per day from April to June.

"Recently, there was a forest fire near my locality and we were able to mobilize everyone to control the fire on time due to this SMS system. Compared to other systems, this SMS system is very efficient for community mobilization," said Tara Dhungana, Community Forest Advisor.