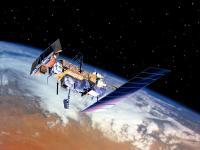 NOAA-19, designated NOAA-N' (NOAA-N Prime) prior to launch, is the last of the United States National Oceanic and Atmospheric Administration's POES series of weather satellites. NOAA-19 was launched on February 6, 2009.

On November 4, 2008, NASA announced that the satellite had arrived at Vandenberg aboard a C-5 Galaxy military transport aircraft. Installation of the payload fairing took place January 27, 2009; second stage propellant was loaded on January 31.

The satellite was successfully launched at about 2:22 a.m. PST. February 6, 2009 aboard a Delta II flying in the 7320 configuration from Vandenberg Air Force Base.