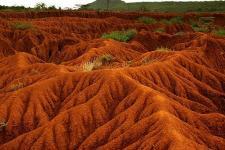 Soils and their significance to human populations is often solely associated with agriculture. The health of soils is a primary concern to farmers and the global community that depends on agriculture. Soils are the foundation on which a majority of food is grown. However, when considering soil erosion, the effects go beyond the loss of fertile land. Soils and how they are recycled on Earth directly affect carbon and other greenhouse gas content in the atmosphere. Soils are also a key factor in preventing drought and desertification conditions, as healthy soils harbor more moisture and vegetaion that would mitigate these disasters.

1. What is soil and soil erosion?

Soil is one of the only natural aspects that is biogeochemical: it is at the intersection between biologic, geologic, and chemical processes. Soils directly contribute to basic human needs such as food, clean water and air, and are a major carrier for biodiversity.

Erosion is a geologic process wherein rock, soil, or dissolved materials are worn away and transported from one location on the Earth's surface to another. Erosion encompasses events such as landslides. Of the natural erosion processes that occur on Earth, soil erosion is among the most pertinent with respect to human livelihoods. Soil erosion is defined as the displacement of the upper layer of soil by water, wind, or other physical erosion; it is a natural process that occurs over geologic time and is essential for nutrient cycling on Earth.

Modern concerns about soil erosion are related to its acceleration. Soil is no longer eroding at a natural rate due to human activity and climate change. It is possible to create soil relatively quickly by composting, but this is a short term solution and compost lacks many of the nutrients and biodiversity that natural soils encompass. Natural soils take several thousand to millions of years to form through complex biogeochemical processes. In terms of a human timescale, soil loss is not easily renewed. Therefore, it is pertinent to properly maintain the soils that exist now.

Soil erosion is mainly caused by water forces such as rainsplash and water flow. The effects of water forces on soil are exacerbated by inappropriate agricultural cultivation techniques that leave soils weak and bare. For example, there is a myriad of new studies linking tillage practices to massive rates of soil erosion. Additionally, many agricultural monocultures, such as cotton, coffee, palm oil, soybean, and wheat cannot hold on to the soil with their roots adequately enough to maintain a compact soil layer. Another major factor is the increase of deforestation that leaves soil bare. These practices lead to structurally weak soils that are susceptible to erosion primarily from water. As rainfall, deforestation, and agricultural practices increase, the rate of soil erosion will also continue to increase, threatening the sustainability of human societies.

2. How is soil and soil erosion monitored from space?

The availability of up-to-date and accurate soil information is crucial for monitoring and disaster management purposes. Mapping exactly how much soil is being lost in an area can be useful for agricultural planning. In places where there is a lot of soil loss, conservative agricultural methods may need to be adopted. Soils can also be mapped with respect to their moisture content or other broad characteristics. This information is useful fin determining what areas may be more prone to drought and desertification conditions. Remote sensing methods can show erosion patterns and soil characteristics as a means of acquiring input data for models, indirectly assessing soil based on vegetation cover, or directly identifying soil features.

Soil emits specific wavelengths or a combination of spectral bands according to a range of chemical and physical characteristics. This makes it possible for satellite remote sensing techniques to discriminate between different soil surfaces and infer soil characteristics. The radiation comes from several important soil factors: moisture, organic matter, surface texture, and iron content. Monitoring these factors seperately or in combination determines soil health and risk of erosion in a study area.

There is an increasing use of Unmanned Aerial Systems (UAS), such as drones, that allow anybody to monitor land. This technology is maturing quickly and is flexible; UAS can fill gaps between satellite-based and ground-based geo-sensing systems. In figure 1, local soil erosion is mapped with UAS. This method is useful for gleaning information on a certain area such as a specific farm.

2.b USLE method for soil erosion.

Today, one of the most effective ways to determine soil erosion patterns is by using the USLE (Universal Soil Loss Equation) method. There are also variations of this equation such as the MUSLE (Modified) and RUSLE (Revised) methods depending on user needs. These equations estimate soil erosion in watershed areas and have been widely accepted for over 30 years due to their simplicity. The workflow for these equations is demonstrated in figure 2.

Mapping erosion risk areas and utilizing the empirical USLE method requires different input data such as precipitation patterns, land cover data, and digital elevation models (DEM). USLE is a popular method due to its wide use, relative simplicity, and ability to be easily compared with other soil erosion research using similar methods. To translate this onto a map, a grid-based discretization method can be used. First, the required input data is prepared for each grid and the computed values are encoded. This coverage is overlaid by soil loss rate as calculated using the USLE method and GIS packages. The result is a map with soil erosion risk displayed from low to high. The soil loss equation is useful for presenting several different scenarios by changing values for the variables that fluctuate. Increasing the rainfall R or crop management C factors and comparing the outcomes can provide information needed for solutions to soil erosion.

With regards to accuracy, soil coverage is often produced at a relatively coarse scale (1 km) from remote sensing techniques, but this allows for greater spatial coverage and more ferquent updates. Additionally, the analyses produced using the USLE method are estimates of long term soil loss and do not apply to single storm events or specific years, for example. this data resolution is useful nevertheless in the context of mapping data deprived regions such as Africa.

It is also important to note the assumptions that are made when mapping soils. The spectral reflectance of eroded or accumulated soils is assumed to have inherently different attributes than non-eroded "healthy" soils. Remote sensing techniques only characterize the surface and, occasionally, shallow depths of soils. It is assumed that the soil surface is a sufficient indicator for the overall soil profile of an area. One can limit estimation variability by dividing watersheds into subareas, each with approximately uniform characteristics.

Ideally, soil characteristics would be monitored in situ and remotely for greater accuracy. However, in many parts of the world, the current networks of ground stations and soil scientists conducting in situ soil assessments are sparse. In the context of soil monitoring at a continental scale, the retrieval of soil characteristics by remote sensing is an effective alternative. Soil maps can help streamline conservation efforts by showing high risk areas that need additional observation from in situ methods.

There are many available datasets based on remote sensing that can be used to assess soils. Many of these datasets cover large amounts of land, often on a continental scale. Additionally, there is countless scientific literature presenting soil erosion findings on national, regional, or local scales.

4. How does soil erosion fit into the context of disasters and climate change?

Sustainable soil management has a large potential for regulating the climate in a myirad of contexts. Soils also play a clear role in many Sustainable Development Goals (SDG). Land and soil degradation is linked to famine, the loss of biodiversity, and climate change, both as a cause and effect.

5. How are soil maps used for disaster management?

Soil erosion and soil characteristic maps can provide useful information to aid land management decisions. Soil erosion is a disaster that can be largely attributed to human misuse of land and can be overcome if land management practices improve and become more sustainable. For example, correct and timely characterization of soil moisture deficits over large areas can be proxies for water management needs or incoming drought and desertification conditions. This information is more accurate if conducted on a larger scale as discussed in the USLE mapping method. An operational example of using soil maps to manage agricultural practices was conducted in a watershed region of Washington Sate, USA. The RUSLE method was applied to Pataha Creek watershed and simulated for a scenario of applying no-till practices by changing the crop management variable C in the equation. Applying no-till to all agricultural land showed soil loss and soil sediment yield for cropland was dramatically reduced from 17.67 to 3.89 t/ha yr (figure 3).

Figure 3. Soil loss at Pataha Creek watershed (t/ha yr) with (a) representing current agricultural practice and (b) representing a simulated no-till practice scenario for the region.

Coupling GIS and soil erosion is an efficient example of how disasters can be managed and mitigated by determining the spatial distribution of soil erosion under a variety of simulations. This procedure conducted in Washington State can easily be replicated for other parts of the world to compare findings. Seeing the effects of no-till agriculture is just one example of how humans can modify their land use for erosion control.