UN-SPIDER, SENACYT and CONRED of Guatemala to conduct a training course in July 2017 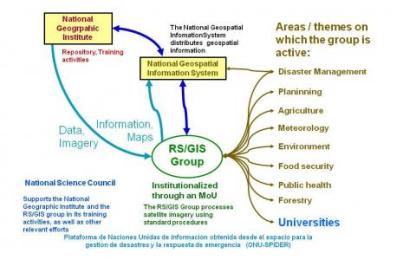 UN-SPIDER, the National Secretariat of the Council of Science and Technology of Guatemala (SENACYT) and the Executive Secretariat of CONRED (SE-CONRED)

In recent decades Guatemala, like other countries around the world, has been experiencing disasters triggered by geologic and hydro-meteorological hazards that have impacted urban and rural communities. As a way to increase the capacity of the National Coordinating Agency for Disaster Reduction of Guatemala (CONRED) and other government agencies to take advantage of the opportunities provided by the space community, UN-SPIDER recommended these government agencies the establishment of a technical, inter-institutional team that would focus its efforts on the generation of geospatial information extracted from space and in situ data as a way to contribute to disaster risk reduction, preparedness and emergency response efforts related to different types of events. An initial technical team was established in July 2012 with five institutions. Unfortunately, the MoU signed among them was not renovated on time, and so, a new efforts has been initiated by SE-CONRED in 2016 as a way to re-establish such a team with more institutions, including universities and NGOs. UN-SPIDER, the National Secretariat of the Council of Science and Technology of Guatemala (SENACYT) and Executive Secretariat of CONRED (SE-CONRED) are joining forces to conduct a three-day long training course focusing on two UN-SPIDER Recommended Practices focusing on droughts and forest fires. The training course will be conducted from 31 July to 02 August 2017 in the premises of the GIS Laboratory of the Faculty of Agriculture of San Carlos University (USAC) and will be impacted by experts from the Agustin Codazzi Geographic Institute (IGAC, in its role as one of the UN-SPIDER Regional Support Offices) and of the Federal University of Santa Maria in Rio Sul, Brazil. The training course will target members of the inter-institutional technical team that is begin set up by CONRED at the recommendation of UN-SPIDER. This technical team will focus its tasks on the use of remote sensing techniques and UN-SPIDER Recommended Practices as a way to generate relevant and timely geospatial information that is useful for disaster risk reduction, preparedness and emergency response efforts. The training segment on the UN-SPIDER Recommended practices focusing on droughts are geared to contribute to the conduction of the project entitled “Strengthening Early Warning Systems for Drought” (SEWS-D). This project, conducted in El Salvador, Dominican Republic, Guatemala and Honduras aims to incorporate the use of drought indicators targeting the status of vegetation as a way to complement data generated by meteorological departments on rainfall and weather. The training on the Recommended Practice on forest fires stems from the interest of the University Centre in the northern province of Peten, which has seen an increased number of forest fires in this first half of the year.

The training course will target members of the inter-institutional technical team that was set up by CONRED at the recommendation of UN-SPIDER.
GIS Laboratory of the Faculty of Agriculture of San Carlos University (USAC)
Guatemala City
Guatemala
Spanish