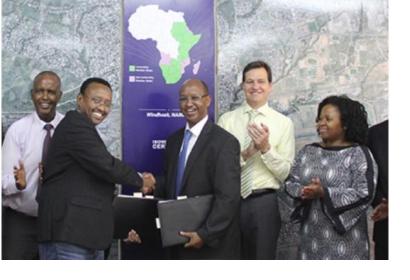 The Regional Centre for Mapping of Resources for Development (RCMRD) and the Climate Prediction and Applications Centre (ICPAC) of the Intergovernmental Authority on Development (IGAD) have signed a memorandum of understanding in Nairobi, Kenya on 18 January 2017. Speaking at the ceremony, the Director General of the RCMRD, Dr. Hussein Farah, emphasized the importance of both institutions in climate resilience and adaptation mechanism in Eastern and Southern Africa. RCMRD serves as a hub for the SERVIR-Eastern and Southern Africa project. Through their agreement, the SERVIR project will support ICPAC’s work on rangeland early warning system, climate diagnostics and ground water mapping and management for 9 months.