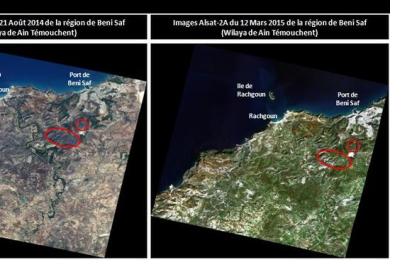 Through satellite-bases research, the Algerian Space Agency ASAL has found a positive vegetation recovering of the forest areas located in the Aïn Témouchent province after the damages caused by wildfires in 2014.

The forest fires of summer 2014 devastated around 180 hectares, with Beni Ghenam being the most affected region, as Algérie1 reported. The main cause of the fires was human negligent behaviour while visiting the forests.

The analysis and comparison of images compiled by the Alsat-2A satellite in August 2014 and March 2015 has shown a growing chlorophyll activity related to the increase of vegetation along the burned areas.

This result helps to better understand the process of forest recovery after wildfires by assessing the presence of green biomass.