CONAE and ESA meet with users of space-based information 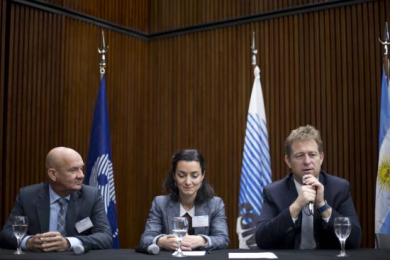 The Cultural Center of Science in Buenos Aires hosted a meeting organized by the Argentine Space Agency (CONAE) and the European Space Agency (ESA) to present the uses of their satellite missions to the users of space-based information.

The meeting showed the cooperation efforts between the two agencies and their joint projects as well as their own satellite missions, earth observation programmes and services. CONAE presented their SAOCOM mission, which uses the Synthetic Aperture Radar (SAR) data and can be used in e.g. in agriculture, hydrology, hazard mapping or urban monitoring. More information about the mission is available here: http://www.conae.gov.ar/index.php/english/satellite-missions/saocom/introduction Representatives from ESA presented the Copernicus programme for earth observation and the use of the data from the Sentinel satellites. More about Copernicus can be found here: http://www.esa.int/Our_Activities/Observing_the_Earth/Copernicus

Lastly, they mentioned the launch of ESA’s new radio dish in the deep-space tracking station in Malargüe, Argentina. It is going to be used for space investigation and radio astronomy. Its launch is part of the cooperation between the two agencies, which are an important part of Argentina’s strategy towards progress in spatial technology and knowledge. The collaboration between the two agencies started in 1997 when they signed the first agreement on reception and distribution of ERS-1 and ERS-2 satellites.Apart from Argentina’s direct reception of ESA’s satellites’ data, the collaboration efforts involve joint projects, trainings, workshops or traineeships for Argentinean students. Argentina has a longstanding experience in earth observation and it is an important partner for ESA in South America