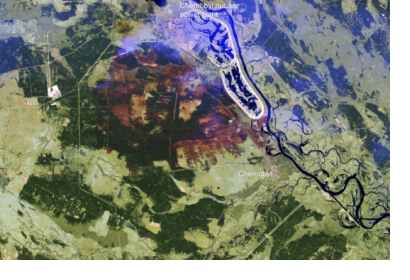 A series of wildfires have been destroying forests and agricultural land near the abandoned Chernobyl nuclear power plant in Ukraine. Due to concerns about the spread of these fires and the potential dispersion of smoke plumes and radioactive chemicals to nearby inhabited areas, the European Union’s Emergency Response Coordinating Centre (ERCC) requested the activation of the Copernicus Emergency Management Service (EMS). Under the Copernicus EMS activation, satellites have mapped the actively burning fires, tracked the transport of smoke from fires, and assessed the damaged areas. These maps provide useful information for fire management and help authorities respond to the consequences of the wildfire.

Based on data from the Copernicus Sentinel-2 mission, using a wide-swath multispectral sensor that can image in 13 spectral bands, a map was developed that shows the situation prior to the fires on 7 April, and then on 12 April. The image from 12 April has been processed to show the smoke from the fires and the burned area through the smoke. The Sentinel-5P mission was used to create a map to track plumes of traditional pollutants, such as Nitrogen oxides (NO2), which is an important trace gas in the Earth’s atmosphere resulting from anthropogenic activities (notably fossil fuel combustion and biomass burning) and natural processes (wildfires, lightning, and microbiological processes in soils). The map shows that the plume of NO2 traveled with other species of pollutants towards Kiev during the first days of the fire. In addition, the Copernicus Sentinel-3 mission has recorded the fires in the Sentinel-3 World Fire Atlas Prototype. The maps and vector data are available for viewing and download on the Copernicus EMS activation website.

On 2 April, a series of wildfires started in forests near the city of Chernobyl, where a nuclear accident occurred in 1986. The area is still heavily contaminated. Wildfires around Chernobyl are a seasonal phenomenon, however, this year, fires have been stronger than usual due to a mild winter and spring that left the forest floor dry. The heavy rain in the last few days has extinguished most of the flames and now the wildfires are considered under control.