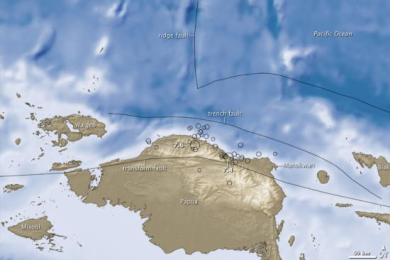 Geologist from the Australian National University (ANU) documented how the Banda Detachment fault in eastern Indonesia formed and works. This finding will help to evaluate the dangers of future tsunamis in the area that is part of the Pacific Ring of Fire, known for frequent earthquakes and volcanic eruptions.

Dr Jonathan Pownall, leader of the research, confirmed that “a 7km-deep abyss beneath the Banda Sea off eastern Indonesia was formed by extension along what might be Earth’s largest-identified exposed fault plane.”

ANU researchers worked together with Royal Holloway University of London experts analyzing high-resolution maps of the Banda Sea floor and found rocks flooring the seas are cut by hundreds of straight parallel scars. The marks show that the missing crust is bigger than a country like Tasmania or Belgium and it was torn apart by 120 km of extension along a detachment fault which formed the ocean-floor depression.

The findings will contribute to evaluate future possible hazards like earthquakes and tsunamis which are frequent in the region. For more information please click here.