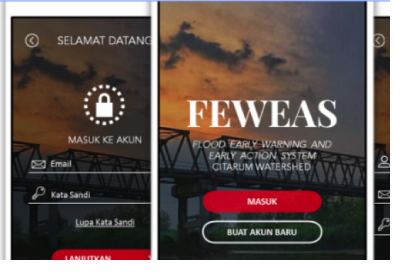 A new mobile phone application provides early warning and early action information related to the Citarum River Basin in Indonesia. FEWEAS Citarum can be downloaded for free on Android and iOS phones and is expected to help the authorities with the mitigation and disaster risk reduction around the area of the Citarum River Basin in Indonesia. The app is an initiative of the Bandung Institute of Technology (ITB) research team in collaboration with the International Federation of Red Cross and Red Crescent Societies (IFRC), the Indonesian Red Cross (PMI) and Zurich Insurance Indonesia (ZII).

Indonesia is known as one of the countries that is more prone to flooding disasters primarily due to factors such as the country’s topographic condition and geographical location, prolonged and intense rainfall, and human activities. In particular, the Citarum River Basin in Indonesia has been affected by environmental damage such as deforestation and drains blocked by waste. As a result of these and other factors, cities such as Bandung suffer from regular flooding.

The FEWEAS Citarum app was launched on 11 December as a solution to reduce risks and increase community resilience to floods in the Citarum River Basin. The app generates flood warnings from a combination of data on topographic conditions, weather, soil types, and spatial planning. The data is collected through the National Disaster Mitigation Agency [BNPB] from stakeholders, ministries and institutions, including the National Oceanic and Atmospheric Administration (NOAA).The app claims to be able to predict the location, time, and height of the flood with up to 90% accuracy. The results can be utilized for long-term prediction of floods as well as for the anticipation of drought.