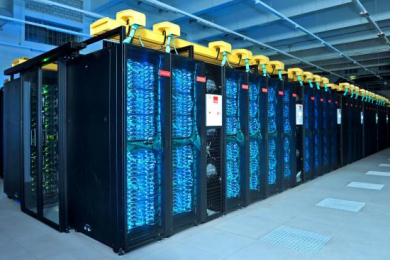 Data generated by Earth observation satellites can provide critical insights for disaster mitigation and management by revealing changes in the Earth’s surface over time. However, the great volume and different types of satellite data collected can pose challenges for evaluation. A new partnership between one of Europe’s largest supercomputing centres, the Leibniz Supercomputing Centre (LRZ), and the German Aerospace Center (DLR), aims to provide the necessary computing power to analyse vast quantities of Earth observation data, along with other global data sources that provide frequent updates about the Earth’s condition.

Better evaluation of Earth observation data improves knowledge and management of global environmental issues. This was reiterated by Hansjörg Dittus, DLR Executive Board Member for Space Research and Technology, in a DLR news release about the new cooperation agreement. He stated, "In [the] future, the cooperation between DLR and the LRZ will make it possible to analyse vast quantities of data using the latest methods independently and highly efficiently, to aid in our understanding of global change and its consequences. Examples of this are increasing urbanisation, the expansion of agricultural land use across the globe at the expense of natural ecosystems and the rapid changes occurring in the Earth's polar regions and in the atmosphere, which will have an undisputed impact on humankind.” DLR will contribute space technology and its own sensor data to the project.

In addition to enabling greater computing power and improved data analysis, the DLR and LRZ cooperation, which was formalized through an agreement signed on 27 May 2019, will also integrate innovative approaches such as artificial intelligence (AI) and machine learning. These tools can be useful for analysing global change data from social networks, which is often less predictable than data from national Earth observation missions. For example, social network data varies in structure and accuracy, and may be available for a shorter period of time. DLR researchers, according to the news release, “ … are thus increasingly using artificial intelligence (AI) and machine learning methods to identify trends in global change and analyses of natural disasters and environmental contexts in global and regional time series spanning several decades.” Moreover, AI techniques can help automate analysis of, and identify phenomena within, an ever growing amount of Earth observation data, which conventional modes of analysis have a difficult time managing.

The value that could be gained from space and AI synergies is gaining greater recognition on a global scale. For example, the 2019 AI for Good Global Summit, held in Geneva this month, included a session on how combined AI and space efforts could address local and global issues, such as predicting and mitigating the effects of climate change.

The topic of using AI for space data analysis is often included within the overarching topic of “big data from space.” This refers to “the massive spatio-temporal Earth and Space observation data collected by a variety of sensors - ranging from ground based to space-borne - and the synergy with data coming from other sources and communities,” according to Pierre Soille, Sveinung Loekken, and Sergio Albani, editors of the 2019 Big Data from Space conference proceedings. UN-SPIDER, a programme of the United Nations Office for Outer Space Affairs (UNOOSA), also held a conference on big data from space in November 2018, with a specific focus on its application for disaster reduction and emergency response in Africa. A motivation for selecting such a theme was the recognition that space and big data technologies are, and will be, increasingly important for early warning systems (EWS), a core component of disaster preparedness.

The collaboration between DLR and LRZ seeks to address some of the current major challenges associated with analysis of large volumes of satellite earth observation data, and as a result, better address critical disaster risk reduction and emergency response needs.