How satellite radar can detect slight surface movements on Earth 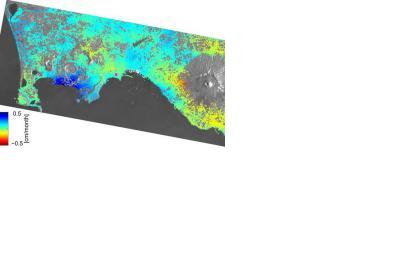 Earth’s changing surface can be closely monitored thanks to the use of satellite radar data. This week at the Fringe Workshop held by the European Space Agency ESA, new advances in the science and applications of Interferometric Synthetic Aperture Radar (InSAR) were presented.

InSAR is a remote sensing technique where two or more images of the same area are combined to detect slight changes occurring between acquisitions. ESA elaborated: "Tiny changes on the ground cause changes in the radar signal and lead to rainbow-coloured interference patterns in the combined image, known as an ‘interferogram’. Small movements – down to a scale of a few millimetres – can be detected across wide areas. Tectonic plates grinding past one another, the slow ‘breathing’ of active volcanoes, the slight sagging of a city street through groundwater extraction, and even the thermal expansion of a building on a sunny day."

A study realised with radar imagery from the Sentinel-1A satellite over a large and active volcanic area near the city of Naples, the Phlegraean Fields, has shown that the ground has been rising by about 0.5 cm per month between October 2014 and March 2015.