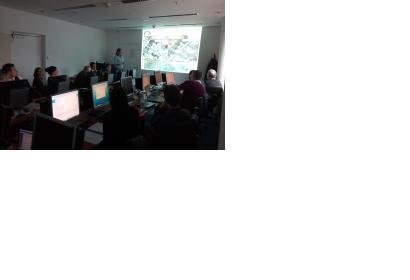 On the sidelines of the 52nd session of the Scientific and Technical Subcommittee of the Committee on the Peaceful Uses of Outer Space (COPUOS), UN-SPIDER hosted a Project Manager (PM) training for the International Charter: Space and Major Disasters specifically for UN-SPIDER's Regional Support Offices in Vienna on 4 February 2015.

The training course was led by three experts of the German Aerospace Center (DLR) and one expert of the French Space Agency CNES; both organizations are International Charter members. The International Charter is an internal agreement among Space agencies to support with Space-based data and information relief efforts in the event of emergencies caused by major disasters.

Seven of UN-SPIDER's Regional Support Offices (RSO) participated in the training course, namely, the Hungary RSO, the Nigeria RSO, the Indonesia RSO, the Russia RSO, the Romania RSO, the Algeria RSO, and the Colombia RSO.

The participants learned about the different roles and responsibilities attached to being a Project Manager including the delivery of accurate data to the user. The Project Manager also needs to have the ability to interpret data and to coordinate, when required, the delivery of value-added products and information. In the second half of the training, the participants were offered a practical exercise on being a Project Manager by going through an activation step by step, from the first email to the final product and the reporting. The exercise was based on a real-life activation of the International Charter in July 2014 linked to a forest fire in La Vega, Dominican Republic.