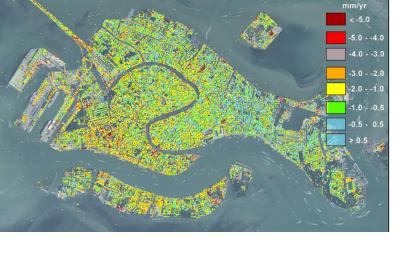 Researchers at the University of Padua, Italy, have found satellite-based evidence that the city of Venice keeps sinking. In their article titled "Natural versus anthropogenic subsidence of Venice", Pietro Teatini and his colleagues explain: "During the last two decades, satellites instrumented with SAR (Synthetic Aperture Radar) sensors provided excellent data for detecting land displacements by interferometric processing. The use of this methodology opens new possibilities for a more accurate interpretation of the land subsidence."

Teatini, a hydraulic engineer, said according to Livescience: "Venice is in a situation so critical with respect to the sea that continuous monitoring of the city's movement is of paramount importance." This is especially critical in the context of sea level rise.

The study used persistent Scatterer Interferometry using ERS and ENVISAT C-band and TerraSAR-X and COSMO-SkyMed X-band acquisitions over the periods 1992–2010 and 2008–2011, respectively.