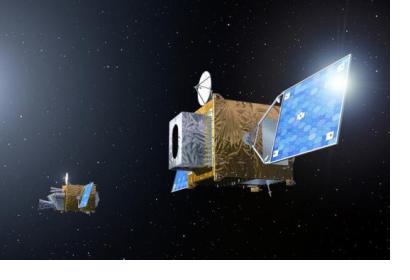 Arianespace will be in charge of the first launch services for the Meteosat Third Generation (MTG) series of geostationary satellites after the signature of a contract with EUMETSAT.

The agreement has been signed few days following the successful launch of MSG-4. It has fixed the launches of MTG-I1 and MTG-S1 and proposed the option of MTG-I2 for the time period 2019-2023.

Arianespace will use the Ariane 5 ECA launchers placed in the Guiana Space Center, Europe’s Spaceport in Kourou, French Guiana, to set into space the Meteosat Third Generation (MTG) program.  It will significantly improve the services of forecasting high impact weather over Europe and Africa, currently delivered by the Meteosat Second Generation series.

The MTG satellites, developed in cooperation between EUMETSAT and the European Space Agency (ESA), will represent the highest level of complexity and innovation existing among the operational geostationary Earth observation systems.

“The MTG series will comprise four imaging and two sounding satellites. The MTG-I imaging satellites will carry the Flexible Combined Imager (FCI) and the Lightning Imager. The MTG-S sounding satellites – a first for Meteosat – will carry an Infrared Sounder (IRS) and an Ultraviolet Visible Near-Infrared spectrometer, which will be provided by ESA as the GMES Sentinel-4 mission,” explains the European Space Agency (ESA) in its website.